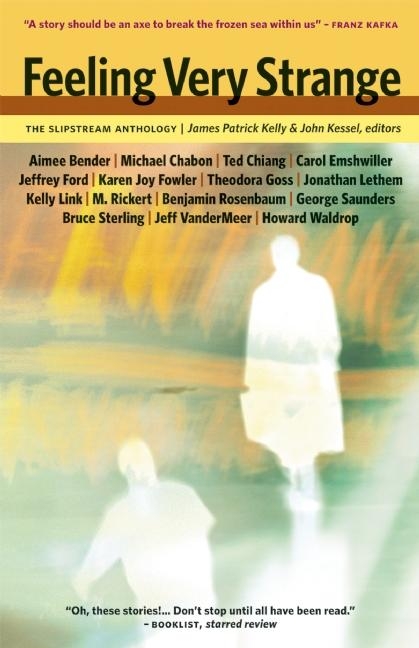 Here’s a story that made me feel strange, keeping, on the whole, the promise of the slipstream anthology it’s in.

The premise is that the popular idea of Christianity is correct. Not, mind you, that there is anything explicitly Christian about the world the author, Ted Chaing, presents. There’s no talk of the death and Resurrection, and there’s no talk about the trinity, for instance. What there is, though, is a lot of talking about the necessity of loving God, the absolute presence of Heaven and Hell, and the visitations of angels.

There’s no debate about these things. They are not a matter of faith. They are just part of the world. Like trees, for instance. Angelic visitations are accompanied by brief glimpses of Heaven. And they result in miraculous changes in the lives of some witnesses. Often positive changes, but not always. And, on occasion, there are glimpses of Hell, where–sometimes–people who are known to have died are seen. When people die, you even see them go to Heaven or to Hell. All you have to do to get into Heaven is love God.

And that’s the thing, isn’t it? Even in our world, where these things are not common as dirt, that’s the big one. Love God. Everything flows from that. How much easier it must be in the world of the story where all doubts are removed. These things literally happen, and pilgrimages to places where they happen pretty often are commonplace.

Anyway, that’s the background. The story is mainly about one guy, and his search to… Well, his search. He intersects with a couple of other people out in a desert location where angelic visitations happen fairly often. And his search comes to an end. And it all made me feel pretty strange. Highly recommended.