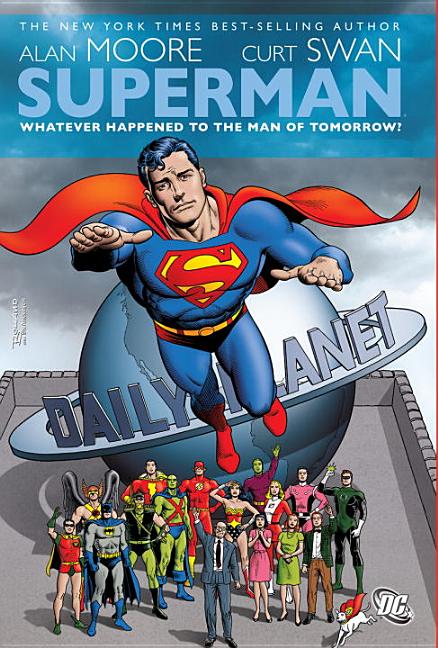 Gaiman points them out in his introduction to the collected volume. Basically, both stories want to be a pause in the on-going story lines of these continuously-published comic book heroes.  And both are.  The Superman story was much more than a pause, coming as it did in relation to Crisis on Infinite Earths and Man of Steel.  It buttoned up an especially comic book-y era, one which had lasted for well more than thirty years, and was a story of a very Superman style.

Now, imagine that Grant Morrison has written the THE BIGGEST THING EVER to happen to Batman.  Actually, you don’t have to imagine it, since you can read them in Batman numbers 655 to 685.  And then it’s followed up with Gaiman.  So you have Morrison doing his Morrison thing for thirty or so issues, deconstructing the Batman back story, culminating with a storyline titled “Batman R.I.P.”  Then this thing from Gaiman, with Gaiman doing his Gaiman thing deconstructing the Batman back story.

When Moore deconstructs, he adds a level of psychological realism, dark and gritty when the story calls for it, but mainly something along the lines of, “what if these characters were real people?  What would cause them to act like this, and what would be the spiritual fall-out of that sort of thing?”

When Morrison deconstructs, he asking something along the lines of, “given that this is a comic book, in what way can we understand all of these tales as having happened to the same character, and what happens when the character really tries to make sense of all these events–some of them flatly contradictory?” 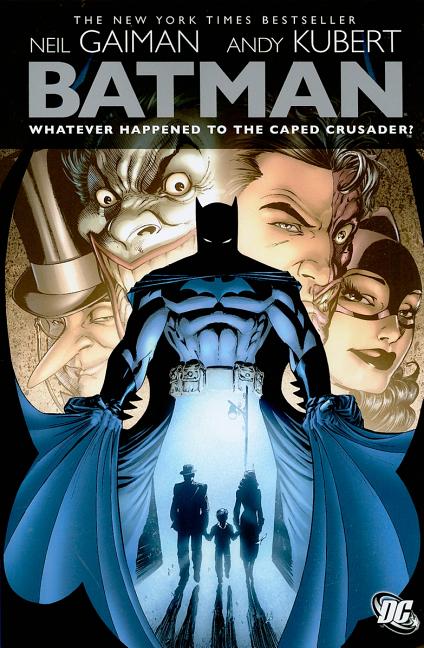 When Gaiman deconstructs, he’s asking something like, “it’s a given that these are stories, and these characters are before us primarily for our enjoyment and for us to make some sense of the world we live in, so what’s the essence of the story, and what’s the angle on the story that shines light on facets of life?”

There are lots of places to get a summary of the story of “Whatever Happened to the Caped Crusader?” so I’m not really keen to spend a lot of time on that.  But I don’t think I can address it very well without looking at the plot, which is primarily in the form of a series of eulogies for Batman.  It’s a very Gaiman-y story.  It reminds me of that other Gaiman comic book–in its over-all form, it specifically reminds me of “The Wake” and particularly the one issue where everyone in the world goes to Morpheus’s funeral.  There’s a detail from that issue, one or two frames where Batman and Superman are talking about the strange dreams they sometimes have, referencing some of the stranger Silver-Age adventures.  The Martian Manhunter is there, too.  As I recall, Batman says something like, “but the strangest ones are the ones where I have my own TV show; do you ever have those?”  And Superman says, “who doesn’t?”  And the Martian Manhunter says, “I don’t.” (Note: as of CW’s Supergirl, Martian Manhunter an at least join a conversation like that. SM Jan. 7, 2018)

It also reminds me of the finale of “The Season of Mists.”  In that issue, Morpheus give a woman he wronged (wronged very badly, out of love–so he thought) the option to move on after spending ten thousand years in Hell.  She could move on to whatever comes next, or return to life as a new-born, not remembering all that came before, but always welcome in the Dreaming.

Finally, it reminds me of Death, who does not make an appearance in this story, despite it being a story about the funeral of Batman, and despite the story being carried forward not by the eulogies presented by those who knew Batman but rather by the disembodied conversation between Bruce and… some woman, who (in a Gaiman story in the DC universe) we might naturally assume is Death.  Actually, it is between Bruce and his mother Martha.  Some might like to argue that it’s not really Martha, but is, in fact, Death taking Martha’s form, and bending the rules for Bruce.  Death has been known to bend the rules before.  But I don’t think so.  Death always appears as Death when Gaiman is writing the character; I think it’s partly a respect thing–Death does not deceive.  Death would not claim to be Martha Wayne.

Also, despite reminding me of the end of “The Season of Mists,” the end of “Whatever Happened to the Caped Crusader?” is not reincarnation event.  Bruce is not reborn as someone else.  He is reborn as himself with a new life, or, at least, a new life in its details.  In its essentials, it will be the same life–Bruce will witness his parents’ murder, and will be Batman, and will die as Batman.

It is a strange Batman story, but one that rewards the reader able to look beyond the disjointed narrative, the ambiguous characterizations, the unexplained references, and the atemporal conclusion. It will also reward the reader able to separate it from “Whatever Happened to the Man of Tomorrow?” with its unabashed Superman adventure, Superman continuity, and Silver-Age knowingness. “Whatever Happened to the Caped Crusader?” is also whatever happened to the dark knight, the world’s greatest detective, the man who took in Dick Grayson as his ward and adopted Jason Todd–making them both into sidekicks named Robin, and whatever happened to all the other characterizations of Batman that had been published to that point? And what, despite the differences, makes them all the same–Batman?