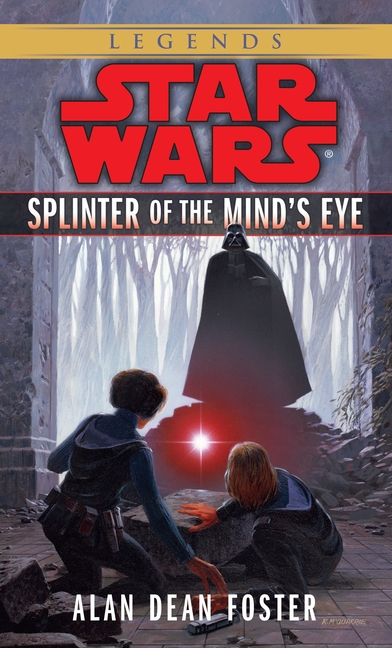 Sure enough, there was nothing in this book about the volcano.

You might think that would be enough, but, heck, I’ve read the thing, why not respond in some detail? So, first, I had to take a break about half way through to read the Neil Gaiman “Whatever Happened to the Caped Crusader?” because Splinter of the Mind’s Eye was… pretty wooden.

However, there are some good points. The adventure and action sequences are pretty good, and there are plenty of these. (Not much plot beyond them, though.) Chases, blowing things up, shooting and light sabering, and more chases, and fist fights, and a dungeon crawl, and more fist fights, and shoot outs, and light sabering. And then there’s Darth Vader. Now, when we get to Darth Vader, it is difficult to keep our knowledge of how he came about and where he wound up from coloring our response to him. But bear in mind that this novel is really only the second appearance of this character. The author didn’t even know he was Luke & Leia’s father. (Indeed, the novel contains significant internal evidence that, at this point in the development of the Star Wars saga, the Empire was presumed to have been around for 40 years*.)

Still, even with those caveats in mind, hoo-boy is Darth Vader scary. Luke and Leia are fairly well drawn as well. Luke is more competent than I would have expected, and his facility with the Force is greater than maybe it should be. Maybe not. Leia is petulant, and hot-headed. But here’s something really interesting. She’s also terrified in a way we never really see in the movies. Remember that scene in the original movie where Darth Vader has her imprisoned on the Death Star and that droid floats into her cell with the huge ole hypodermic hanging off the side of it? Then the cell door slams shut, and we don’t really hear much of it again. In this novel (and I presume in the novelization of the original movie), there is discussion of the torture Leia underwent. This torture has lasting effects on the character of Leia. This is quite good, though it has the effect of making Leia sometimes little more than a damsel in distress.

Anyway. I’m glad I read it, but I’d still like to figure out how, in 1978, the volcano story trickled into the consciousness of me and my lower elementary school-aged friends.

(*A case can be made that these references to a 40 year period are consistent with the film saga. Palpatine probably was moving pieces into place at least several years before the opening of the first movie, and anyone on the wrong side of those early moves could reasonably date the earliest days of the Empire to those times.)