What fun this book has been.  I wasn’t able to follow the issues as they came out last year–the one comic book shop I found which had actually ordered any (and the only one that knew of it when I first asked), had only ordered a small number since–as the clerk (owner?) told me–the other Star Trek titles that had some out lately hadn’t sold well.  This I knew from having pursued the shelves before asking… So my wife got me the collected volume for my birthday!  Whee! 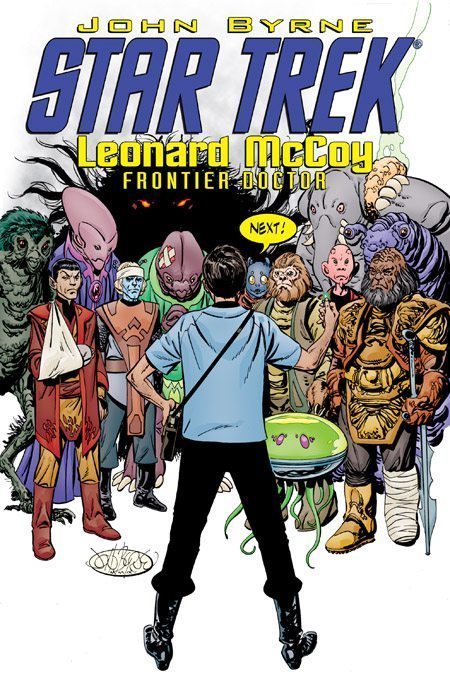 John Byrne’s artwork is terrific.  Bones looks just the way he should.  These stories take place after the five-year misssion, during the Enterprise’s retrofit that is coming to a close when Star Trek: The Motion Picture begins.  So Bones is lean, and has a big ole beard.

The series has a framing device; the issues are presented as letters from Bones to Admiral Kirk.  There’s an exception to this which I’ll get to later.  The uniforms, the looks of the main characters (including Gary Seven, who had been the protagonist of an earlier John Byrne miniseries), and the feel of the backgrounds and layouts are all very Star Trek.  There are some echoes of Gold Key Comics and the Marvel Comics print eras as well.

The stories are terrific, too.  The energy of them kept me turning pages, and I was finished with the book sooner than I hoped I would be, and I wanted more.

In each of these stories, the characters are realized through both position within in the story, but also in terms of that character’s motivations and background.  The single biggest weakness on this front is McCoy’s primary medical companion.  I expected more from him, and from his presentation than Byrne gave us, and this is a pretty significant weakness in the series, I think. I mean, this character’s girlfriend gets a more nuanced treatment.  My point being not that the girl gets better writing or that she was elevated to be a primary character.  I like that, and am glad Byrne did that.  Rather, a character I was led to believe was a primary became a secondary character for no clear reason, and I didn’t like that bit of writing.

McCoy’s character is wonderfully rendered.  And there’s a neat bit of inside fandom where the commanding officer of the Excelsior and the Excelsior’s chief medical officer share a panel.

This is a comic book way, way worth reading, and even worth owning.  And that’s high praise indeed.