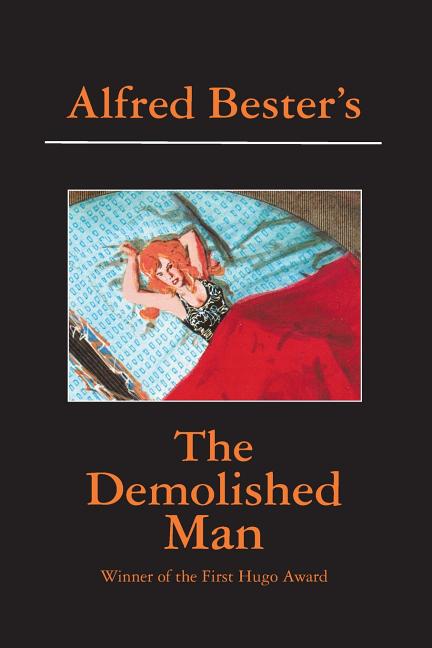 Wow. What an amazing book in a lot of ways.

Don’t pay any attention to its award-winning primacy. It won the first Hugo in 1953, but that’s a nearly meaningless fact; sixty years ago a group of people chose it from among its cohort for a prize, but the prize is only a snapshot of how its quality was assessed back then. What books were in its cohort? I don’t know–remember, no research around here unless it’s fun.

This is a fun book. There’s this killer, and there’s this telepathic cop, and there’s this cat-and-mouse game between them to catch him. The cop knows he’s the killer, after all, the cop’s a telepath, and the killer doesn’t particularly care if the fact that he’s the killer is a secret so much that he cares that he doesn’t get put away. And, in this case, being put away means Demolition. Demolition, we are given to understand, sucks. Eventually we find out why.

But along the way there’s a fun, fun book.

Alfred Bester has built a beaut of a world, sometime in the modestly distant future. Maybe a couple of hundred years, maybe a bit longer, but close enough that we’re still in a recognizable environment of cops, skeeze, wealth & poverty, and things like the burden of proof. Just because the cop is a telepath doesn’t mean he can just arrest the killer. He has to build a case solid enough to convince the Big Data computer in the prosecutor’s office that the case against the killer can be successfully prosecuted in a court before the prosecutor is willing to press charges.

This world feels real with high society shenanigans, an underworld of gangsters, gamblers, and down-and-out pariah telepaths, and a middle class of professionals. Shot through this world is a sizable minority of telepathic people who–almost entirely–are members of the telepath’s club which demands and gets funding through a steeply progressive dues structure in order to help fully integrate telepaths into society, and–in the future–usher in a world where… well, that’s only touched on, since it doesn’t have anything to do, really, with the plot at hand.

At the end of the book, like some 1980’s era nite-time soap, the explanation for the killer’s psychosis and sociopathy is presented, and–though it’s been well foreshadowed throughout the book–it’s really kind of weak. There’s also a romantic sub-plot which I find… icky, given the power disparity between the two people, and how that power disparity defines how the relationship plays out.

But those weaknesses don’t really make the rest of the book ineffective. There’s a lot of really well done regular stuff in this novel, and a couple of really remarkable new stuff going on, especially the way telepathy is presented using various type styles and layouts, and the thoughtfulness Bester exhibits in how telepaths might find themselves integrated, perhaps even hobbling themselves for generations, in order to make their way through a world we could call our own.

2 thoughts on “The Demolished Man–SciFi Self Education”