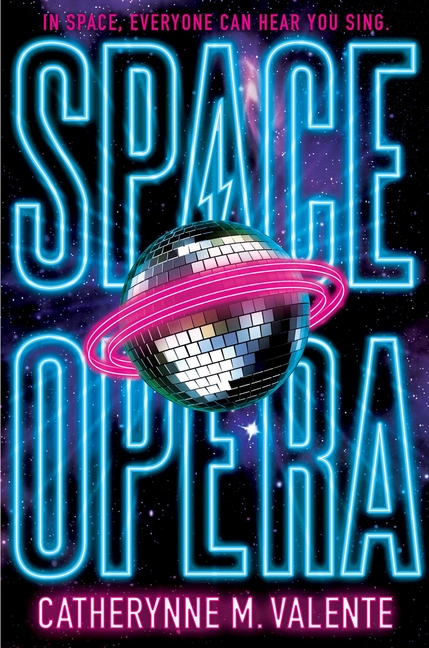 A century ago, the Sentience Wars tore the galaxy apart and nearly ended the entire concept of intelligent space-faring life. In the aftermath, a curious tradition was invented—something to cheer up everyone who was left and bring the shattered worlds together in the spirit of peace, unity, and understanding.

Once every cycle, the great galactic civilizations gather for the Metagalactic Grand Prix—part gladiatorial contest, part beauty pageant, part concert extravaganza, and part continuation of the wars of the past. Species far and wide compete in feats of song, dance and/or whatever facsimile of these can be performed by various creatures who may or may not possess, in the traditional sense, feet, mouths, larynxes, or faces. And if a new species should wish to be counted among the high and the mighty, if a new planet has produced some savage group of animals, machines, or algae that claim to be, against all odds, sentient? Well, then they will have to compete. And if they fail? Sudden extermination for their entire species.

So where is everybody?

Many solutions have been proposed to soothe Mr. Fermi’s plaintive cry of transgalactic loneliness. One of the most popular is the Rare Earth Hypothesis, which whispers kindly: There, there, Enrico. Organic life is so complex that even the simplest algae require a vast array of extremely specific and unforgiving conditions to form up into the mostbasic recipe for primordial soup. It’s not all down to old stars and the rocks that love them. You’ve gotta get yourself a magnetosphere, a moon (but not too many), some gas giants to hold down the gravitational fort, a couple of Van Allen belts, a fat helping of meteors and glaciers and plate tectonics—and that’s without scraping up an atmosphere or nitrogenated soil or an ocean or three. It’s highly unlikely that each and every one of the million billion events that led to life here could ever occur again anywhere else. It’s all just happy coincidence, darling. Call it fate, if you’re feeling romantic. Call it luck. Call it God. Enjoy the coffee in Italy, the sausage in Chicago, and the day-old ham sandwiches at Los Alamos National Laboratory, because this is as good as high-end luxury multicellular living gets.