If it’s an even-numbered year, it must be time for a multiverse-shattering cross-over event!

It certainly often seems that way. Dark Nights: Metal is so huge that it takes four collections to pull everything together. On the whole, it’s an amazing run with some remarkable observations about some of the DC Universe’s most important characters and their relationships. In the history of DC crisis crossover events, Dark Nights: Metal is likely to stand out as the one which most freaked out the readers. Metal takes elements from the history of the DC universe, literally upends them, adds fresh perspectives, and then pushes them through a meat grinder of terror and villainy. Dark Nights: Metal is not for the faint of heart, an success has an unexpected look when it is–as it must be–snatched from the slavering jaws of apparently certain and irrevocable defeat. 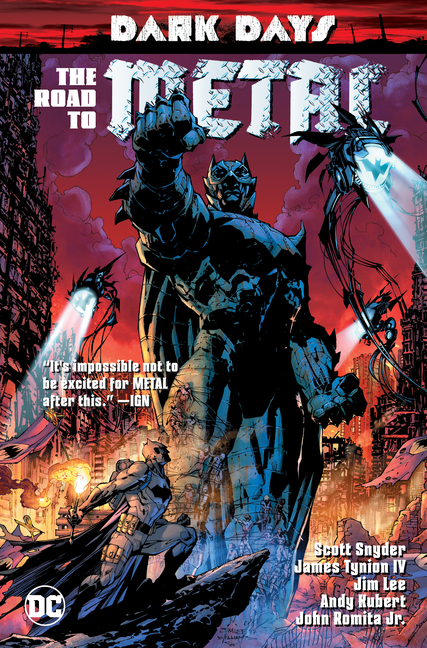 Dark Days: The Road to Metal introduces the reader to the huge multiverse-shattering world of the Metal crisis crossover. A hard world, made harder and more difficult for Our Heroes lay between the covers of this volume. Things can get worse, as they can only in comic books, then then they do get worse. Then they get worse than that. It’s fun, but a long way from joyous. Tread carefully, but do tread. A powerful introduction to a compelling story which shakes the foundations of the DC Universe, and pokes the soft spots in some of the most important relationships among the characters. 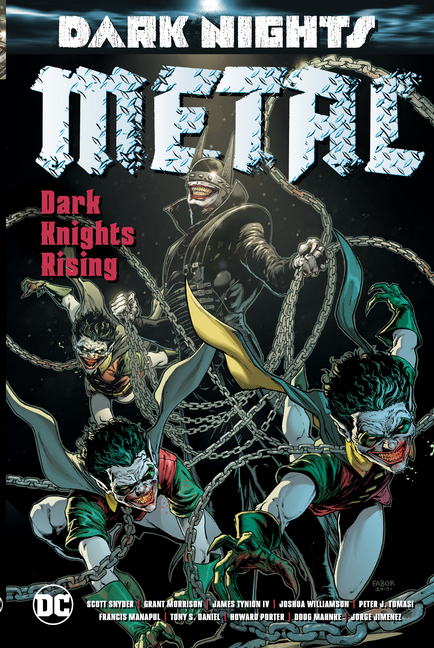 Dark Nights: Metal: Dark Knights Rising brings you your every long-wished for nightmare Batman. Crawling up from the underbelly of the DC Universe’s multiversal dark side, This volume collects several one-shot terrors where Bruce Waye, the Bruce Wayne from several alternate horror-show worlds are given the irresistible offer to Fix the World! (This volume ships on March 26, 2019.) Dark Nights: Metal: The Resistance. A long: title: but… a lot happens. Hope is rekindled, though it remains a weak ember. This fourth volume in the Dark Nights: Metal crisis crossover brings together a variety of hero team-ups to face down the threats from beyond reality! There is a lot of failure, a little bit of success, and a lot of mayhem–just what you want from a crisis team-up!